This finding outlines the top challenges to adopting Model Based Initiatives, some of which are surprising.

What is the biggest barrier to adopting a Model Based initiative?

Over the past ten years, at least anecdotally, the answer to that question has changed. Initially, long list of technology enhancements were cited the major inhibitors to adoption of Model Based Enterprise efforts. As these tools matured, new barriers were encountered in the form of cultural pushback from those who had to create and consume 3D annotated models as engineering documentation. Most recently, the conversations seemed to have stalled on those cultural issues.

These findings, taken from a multi-select question requesting the respondents top three challenges, provide insight into what the biggest challenges to adopting Model Based efforts today. I have to admit: I was surprised. 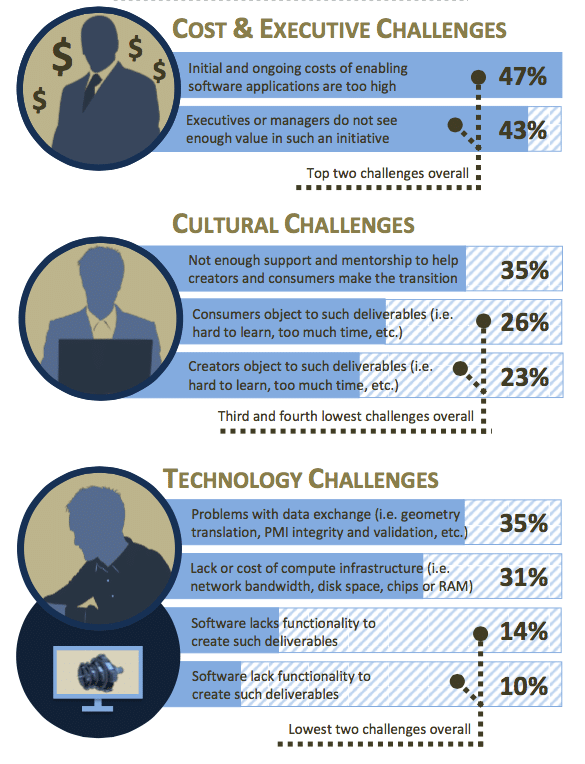 Contrary to Popular Belief, Culture Nor Technology are the Problem

Technology capabilities to enable the creation and consumption of 3D annotated models rank as the bottom two challenges in this study. After that, objections from creators and consumers rank as the third and fourth lowest challenges. It seems that, at least in comparison to the other barriers in this study, cultural and technology issues are not the biggest issues thwarting the advancement of Model Based efforts.

The Value of Model Based Efforts Is Not Self-Evident

In contrast, convincing executive management that spending budget on Model Based efforts counts as the biggest challenge. With some technologies, such as the initial release of parametric Computer Aided Design (CAD), the value is self-evident. Executives can quickly and easily understand the impact of the technology with little argument. Model Based efforts, however, aren’t the only technology-oriented initiative with this as a top challenge, however. The 2013 Simulation Driven Design study showed that convincing executives was also the top challenging that kept organizations from moving forward with concept simulations.

Even with Annotated 3D Models, Data Exchange is a Problem

The 2013 3D Collaboration and Interoperability study revealed that 49% of the respondents spend at least 4 hours a week fixing design data. Findings from this study show that problem extends to developing and consuming 3D annotated models, especially in the supply chain.