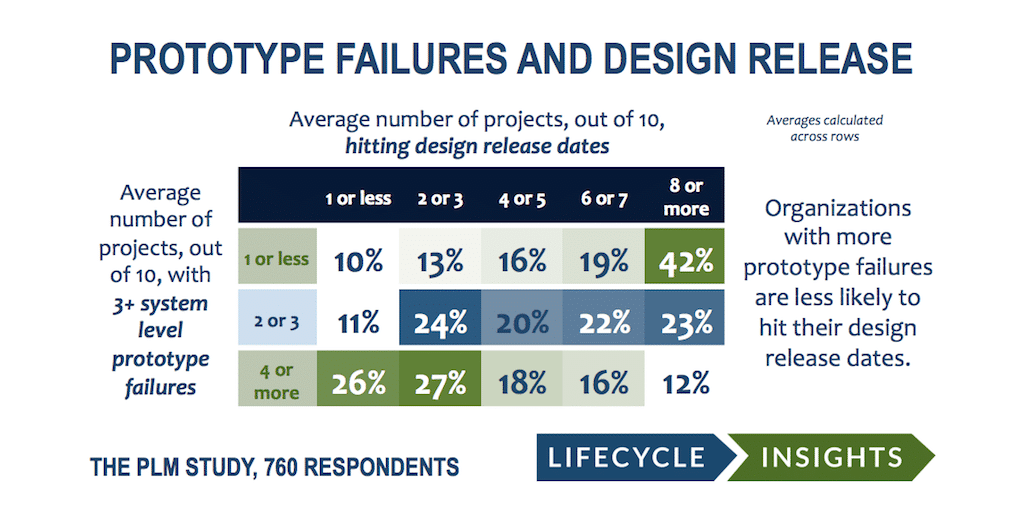 This finding from the PLM Study shows a correlation between prototyping and testing failures and the inability to hit design release dates.

Last week, I published some scary statistics for product development in a post titled Product Development’s Grade? An Epic Fail. In the findings of that post, we found that only 13% of all product development projects are launched on time without a major shift in resources. The other 87%? Those projects were either cancelled, missed their launch date or required a 10%+ shift in resources to get it out on time. While these findings make for startling moment, the first question is an obvious one.

Why do so many product development projects fail?

Obviously, failed prototypes do have a direct impact on the performance of the engineering organization. But just how much? That wasn’t a question I was able to answer until very recently.

In January of these year, I had another chance to measure numerous metrics of product development performance. Well, The State of PLM Study delivered. Consider this tweet that includes a heat map correlation between two performance measures.

Do prototype failures affect design release? See for yourself in our #PLM finding. Post from @ChadKJackson soon. pic.twitter.com/4BHdJNQYdv

Now, before we dive in too deeply, here are a few things you should know about this finding.

So, how do you read this thing?

Ultimately, this is what we expected anecdotally, but now we have statistical evidence. The more prototypes fail, the less likely you’ll launch on time.

Well, there are a host of solutions, old and new, that are directly aimed at enabling organizations to pass testing and prototyping the first time. Let’s review.