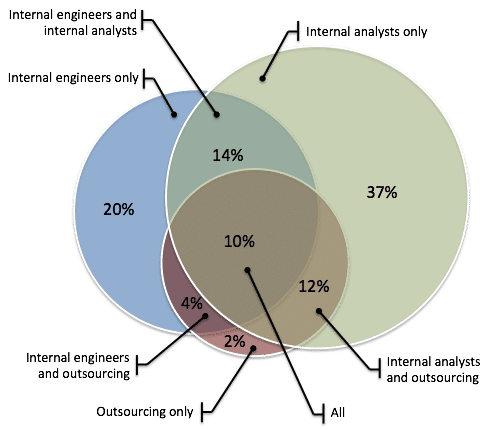 By now, I’m sure most of you know the story. Some 15 years ago, the idea of using simulation to make design decisions first emerged. At that time, the tactical execution of that vision was to put simpler simulation tools in the hands of common engineers. The point was to run simulations of multiple design alternatives and compare them, so engineers could understand which impacted specific use cases. But the trend didn’t quite take off quite like everyone expected.

About a year ago, this exact topic was debated on our web show, Tech4PD. You can watch the full episode on PTC.com, get PTC’s perspective on it as well as read the transcript of you’d like. I debated that driving design decisions by increasing the productivity of analysts was the path to pursue. Jim Brown, my co-host, disagreed. He stated that common engineers were the ones to enable. I lost that debate overwhelmingly, 29% vs. 71%, as a result. I had to wear a full Star Trek uniform as a consequence.

Now, however, I have some statistical evidence on who was right and who was wrong. Back on October 25th, I closed a survey which collected 1,005 responses on Simulation Driven Design. In this post, I’ll share some of the most definitive answers I have encountered to date on this tough question.

Ready? Let’s get some answers.

You’re Using Simulation for What?

Now, the first thing to do is make sure that we’re getting answers from the right respondents.

Of the 1,005 respondents, 179 of them are employed at software or service providers. Let’s filter out them completely.

Next, we want to listen to the respondents that are using simulation to drive design decisions. The survey included a bank of questions on practices, a few of which were aimed driving decisions based on simulation results. Here’s the findings from those questions.

These really are the answers that embody simulation driven design, so we want to understand who in those organizations are using simulation. We only want to look at responses from respondents that said they were using simulations for one of these purposes. That filters out 475, leaving us with 351 respondents.

Who Is Using Simulation?

Now, the survey included questions asking who uses simulation in the detailed design phase. Here’s the spread across the options.

This is an answer. But is it really the answer? Yes, this was a multi-select set of answers. By simply adding up the percentages, you can see there is some significant overlap between these answers. And, frankly, that represents reality. Organizations  employ many of these options simultaneously.

Now, it’s becomes far more interesting to see who is using different combinations of internal engineers, internal simulation analysts and external parties to drive design decisions based on simulation results. So here’s the venn diagram that represents that. 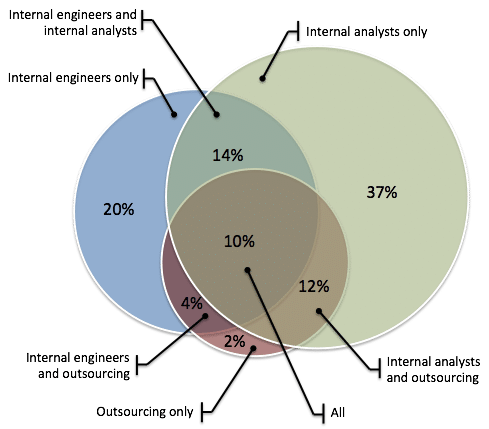 I find the answers represented here interesting ones. Far and away, using simulation analysts only is the most frequently used role used behind simulation driven design at 37%. Then you have engineers only at 20%. This could represent a split between large and small to medium sized companies. I’ll save that for another post. After those two, you have three combinations of different roles at 14%, 12% and 10%.

In practice, there are very rarely black and white answers. While 37% of all respondents who cited the use of simulation for design decisions utilize simulation analysts only, a very real alternative is presented with engineers only at 20%. Although, for the sake of our prior Tech4PD debate, I’ll bend the rules and say this exonerates me. For now.

Alright folks. I’m interested in getting your thoughts! What combination of roles are you using for your simulation efforts? Are you driving design decisions based of those results?