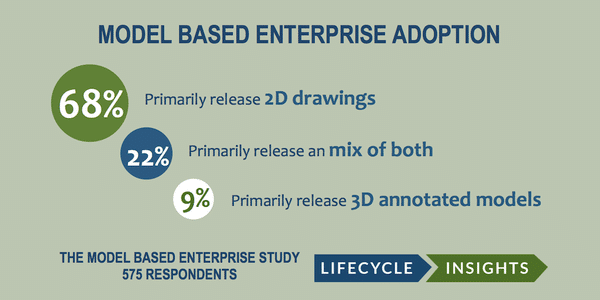 This finding from the MBE study shows that many companies are exploring MBE, but few have fully adopted its practices.

In recent years, there has been a lot of discussion about Model Based Definitions, the idea of using 3D models embedded with annotations alongside or instead of 2D drawings. Much of the discussion has been spurred by contractual mandates in the aerospace and defense industry on suppliers to deliver such digital intellectual property alongside physical parts. Now that we’re a few years in, where are we at? How far has MBD been adopted?

In this post, we’ll get answers in the form of findings from The Model Based Enterprise Study, which gather responses from 575 respondents, and its related publications. Earlier this week, we tweeted out this finding.

Here's the current adoption levels of #3D #MBD per our #MBE study. Follow us for #MBD ROI findings later this week. pic.twitter.com/KQaU5ORpwh

Just to provide a little more color on adoption, findings from this study show that 57% of all respondents released 3D annotated models for at least some projects. So, there is a lot of experimentation for this technology led initiative. In contrast, however, only 2% of all respondents exclusively release 3D annotated models. You can find a lot more data on adoption and practices in The State of Model Based Enterprise Report, which includes far more findings from this study.

What’s the takeaway? Many organizations are experimenting with MBD. However, very few are truly committed to the movement.