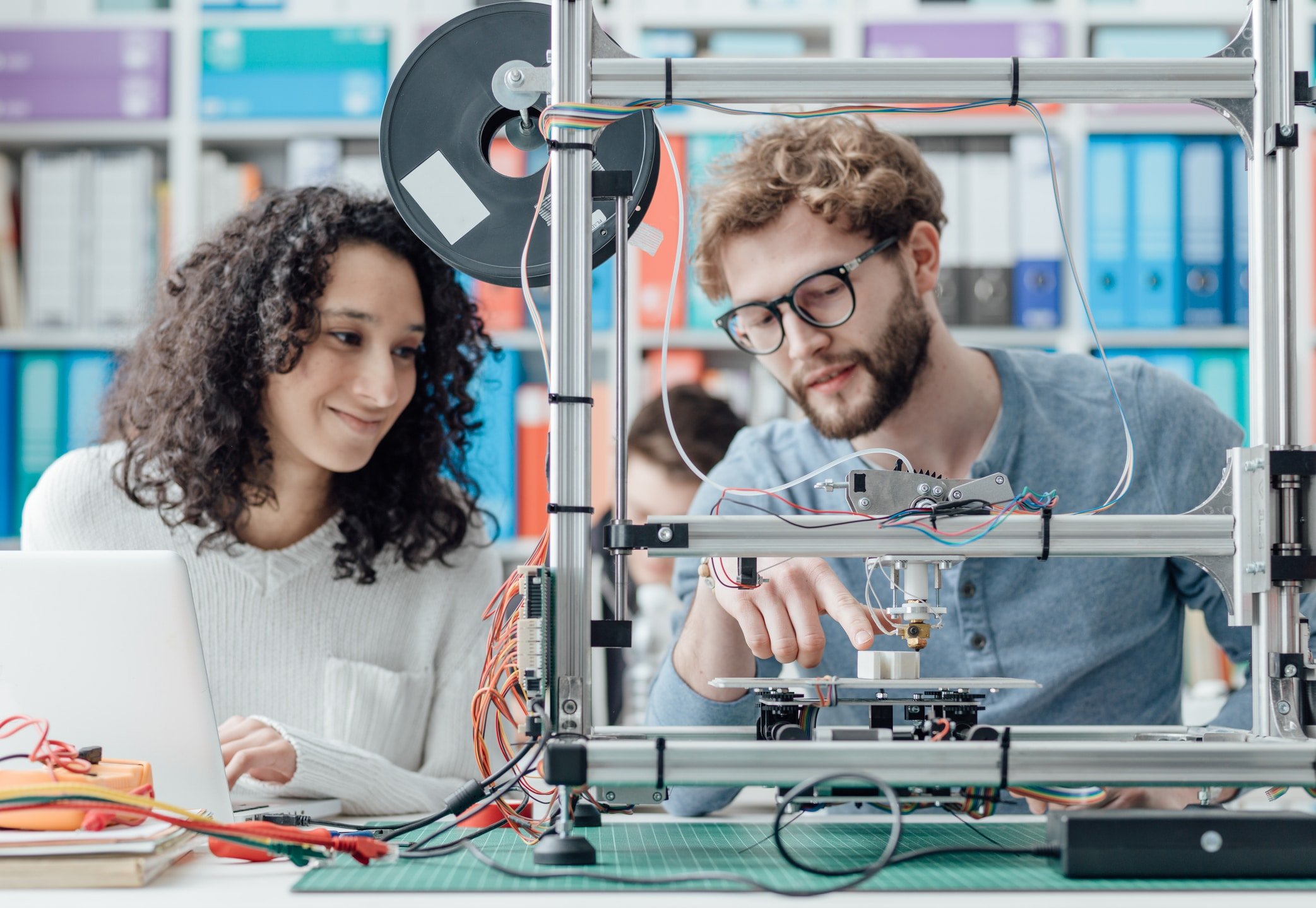 We explore the topic of active learning through real-world problem solving, and how some universities employ this. Active learning has been shown to yield better results than typical lecture classes.

We’ve previously noted the widening skills gap in the United States. Fewer than 40% of undergraduate students who enter college intending to major in a STEM (science, technology, engineering, mathematics) field complete a degree in one of those fields, and the skills gap in the manufacturing industry alone may leave an estimated 2.4 million positions unfilled between 2018 and 2028.

Clearly, it’s important that colleges and universities do all they can to keep interested students in STEM subjects, while at the same time grounding their classes in an intellectually rigorous and challenging curriculum. Active learning through real-world problem solving is one way that some universities have adjusted their programs to keep students engaged and prepare them for the challenges they will face once they enter the working world.

In many universities where the curriculum includes lecture and weed-out classes for new engineering students, students often rely on a “plug-and-chug” approach to test questions. This involves itemizing the known and unknown variables in the problem statement, searching for a formula or equation with those variables, and entering numbers to calculate an answer.

Obviously, though, the world of engineering holds complex challenges where a plug-and-chug approach will not work. Jeffrey Glass, faculty director of Duke University’s Master of Engineering Management Program, notes that engineers must now understand context and deal with fuzzy data. “You’re going to have to decide when enough is enough and make a decision based on ambiguous information,” Glass says. “I think that’s a huge shift in the mindset.”

Elizabeth Gerber, a mechanical engineering professor at Northwestern University, notes another important aspect of real-world challenges: sometimes the proposed solution does not work. She believes that students must be taught how to fail.

“When we hand-deliver ‘neatly structured problems on platters,’ as one of my students puts it, we deprive them of the experience of dealing with the messiness of authentic, real world problems. As a result, they gain false confidence in their ability to play the game. But none of them will graduate into perfectly packaged problems and painlessly derived solutions.”

Saron Yitbarek, a self-taught coder who created the podcast CodeNewbie, had to change her mindset when she first learned how to code. As she tried to learn through an online coding course, she became frustrated and felt like a failure. But then she realized that “failure is not the exception, it’s the backdrop.” Now her podcast has over 1.4 million downloads from more than 100 countries, from people who are eager to learn like she did.

Olin College of Engineering was created by the Olin Foundation and opened in 2001. The President of Olin, Rick Miller, had a vision for the school. “Engineering is to physics what medicine is to biology. One can’t become a surgeon from simply reading text books. At some point they’ve got to pick up a scalpel.” The basis of Olin’s coursework is that real-world challenges are poorly defined, and there are no cookie-cutter answers. Students must therefore be prepared to tackle these types of challenges.

Olin College trains their students in design thinking, an approach where students plunge themselves into the problem, gain an understanding of the context, and then explore as many ideas as possible. Once students have done this, they can decide on a plan. Projects range from a recycling system for a local coffee shop to a facial recognition app. Olin partners with several companies, so that by their senior year, students work on engineering projects for companies like GE, Mitsubishi and Amazon.

Stanford University’s Hasso Plattner Institute of Design, also known as the d.school, was founded by seven professors in 2004. The d.school’s foundation is that problems are often messy and complex, requiring serious creative thinking. Students need practice in tackling these types of problems so that they can go out into the world with creative confidence.

Sarah Stein Greenberg, executive director of the d.school, states, “Fundamentally, we need a way for students to acknowledge uncertainty, but not be paralyzed by it….It’s in those moments of productive struggle, that’s when the breakthroughs happen.”

The d.school emphasizes that students should come up with designs that are actually useful. Because of this emphasis, students have developed dozens of products and startups. In one course, “Design for Extreme Affordability,” students team with partners from around the world in countries that include India, Nicaragua and South Africa. Students at the d.school have developed solutions to issues like malnutrition, clubfoot and unreliable electricity.

According to Scott Freeman, one of the authors of the study, “The impact of these data should be like the Surgeon General’s report on ‘Smoking and Health’ in 1964–they should put to rest any debate about whether active learning is more effective than lecturing.”

Active learning is a far-ranging topic to which we shall return. In our next post, we’ll delve into the demand for engineers with cross-disciplinary knowledge.